Organizational diagram and K.St.N. list for a 1944 Panzergrenadier Division

The panzergreandier divisions were a new designation started mid-war and were basically evolved from the motorized infantry divisions. One exception to this would be the 15th Panzergrenadier Division, the division was form from the remnants of the 15th Panzer Division which surrendered in Tunisia in May 1943. 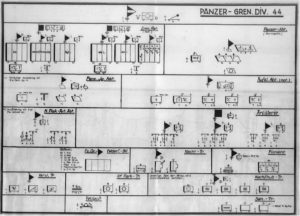 You will notice when comparing the organizational diagrams of the PDG.44 (download below) with the PD.44 is that the panzergreandier division does not have half-tracks units. Though they do have armored vehicles they are mostly, with regard to the infantry, motorized. You will also notice there are three battalions per grenadier regiment instead of the two present in a Panzer Division.

In the armored and anti-tank capacity they have a similar Tank Destroyer Battalion as the panzer division but instead of a panzer regiment it has a single panzer battalion that was typically outfitted with assault guns. In the Artillery Regiment there were no self-propelled artillery guns, though these had been present in the 1943 organization.