You will often read that the SS Panzer Division was better equipped. Here we will see that the organization of an SS Panzer Divisions in 1944 were in fact designed to be better equipped than it’s Heer companion. I always feel compelled to point this out as it is usually brought up. We are strictly discussing theoretical composition based on documentation. What happened on the ground often had little resemblance to any theoretical composition. 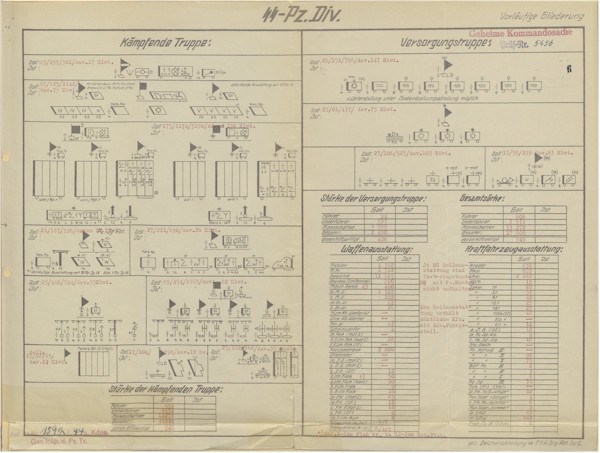 A quick glance, at each of the gliederungs will give you the most significant differences with these two organizations. First, and most obvious, is the extra battalion in each of the Panzergrenadier Regiments. This will account for an additional 2000 men. The other is the two extra 10,5 cm batteries in the Artillery Regiment. This difference accounts for an additional 650 men. After this the differences are less pronounced except when you get the Supply Regiment. As a whole, the Supply Regiment has an additional 500 men. Which makes sense as it is supporting an additional 2500 + men in the other units of the division.

Armor, what really matters in a Panzer Division

What I found interesting on the SS version of the Anti-Tank Battalion is that KStN 1159 was applied instead of 1149. This was also a 14 Gesch, so no real difference there, and seems to have been the precursor to 1149. The first 1149 (in this format) was dated 1.Feb.1944 so definitely available and we see a lot of 1.Apr.1944 KStN on the same list. The vehicle totals shows that it was applied as listed and had 31 Sturmgeschütz in the battalion.

I had stated that the “Standard” Panzer Division applies KStN 1149 (fG) 1.4.44, which is correct.  However, I incorrectly stated that it applied it as a 10 Gesch. version which was not available on the 1.Apr.44 edition of the KStN. While the KStN does not have multiple version, it does in fact, have a footnote on how to apply a 10 Gesch. version of the KStN.   The equipment list shows that only 21 Sturmgeschütz were in the battalion and so this alternate version was apparently applied.  The vehicles used in these units were typically the Jagdpanzer IV.  Additional information about this unit types organization can be found here Jagdpanzer IV Organization.