Forming of the 361st Volksgrenadier Division and initial deployment

The commanding general of the division was Generalmajor Alfred Philippi. On 08.31.1944, he was assigned the command of the division and tasked with its reorganization. The area assigned for the troop training was Wahn, near Cologne.

The division was to be ready for commitment by the beginning of October after a 4-week period of organization. Within the first 10 days the numbers reached about 70% of the required strength but the training level was low. Like many divisions being organized at that time, they had their share of former Luftwaffe and Kriegsmarine troops.

On September 17th, after the British airborne landings in Arnhem, the division was instructed to form an infantry formation of regimental strength (about 900 men) equipped with small arms. The next day, this unit was transferred to a division that was already fully equipped for deployment. This was to be a major setback for the division in terms of trained personnel.

The first of their heavy weapons started rolling in on September 20th. Records indicate that 10 Sturmgeschütze IV were dispatched to the division on September 8th. These were not sent to Wahn but likely to the troop training grounds in Grossenborn, where the assault gun company was being organized.

The reorganization was complete in late September, and the unit was placed on 30 trains and shipped to Zwolle, Netherlands for further training. The 951 Grenadier Regiment had to be rebuilt as the 900 men that were acquired by the replacement army on September 18th impacted the formation of this unit. 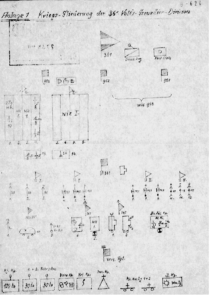 Organization of the division (MS B-626)

The division was unloaded between the 20th and 25th of October in the area of Saarburg – Memmingen. They were being sent to the front as they arrived. Elements of the 361.VGD were subordinated to the 11th Panzer Division as they were being committed to aid in the relief process. The 953rd Grenadier Regiment was the first committed along with an artillery battalion during the night of 21/22 October. They were followed by the 952nd and the 951st respectively. The front line for the 11th Panzer Division was relatively quiet except for the southern section of the line bordering with the 553.VGD. 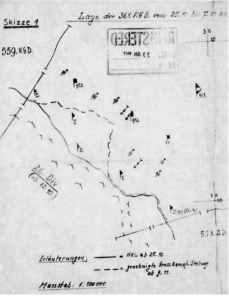 The relief of the 11th Panzer Division was completed without incident. Since there was no enemy activity and no indication that any would occur, the commanding officer of the 361st Volksgrenadier Division adjusted the main line of defense to a more favorable location. The first two weeks were relatively quiet and provided time for further training and for getting familiar with the area. The situation map below shows the 361.VGD in place and the 11th Panzer Division withdrawing.

Around the 3rd of November, the division was ordered to dispatch the 951 Grenadier Regiment, one artillery battalion, and the assault gun company to their neighbor to the south, the 553.VGD. These units represent a significant amount of the fire power the division had to offer and would be sorely missed during the coming engagements in November as the Allies continued their push west.

The Foreign Military Study program were manuscripts prepared by former high-ranking officers of the German Armed Forces. These manuscripts are a good addition to primary source information.  You can download the FMS used in this study below. Other manuscripts can be found at the Sturmpanzer Research Tools section using this link: FMS Index