On April 4, 1944 Sturmpanzer Abteilung 216 received orders transferring them to Army Group Reserves and ordering them to the area of Pisa-Lucca.
At this time the battalion was subordinated to Panzer Regiment 69 under the 76.Pz.K/14th Army.  The regiment had an Eingreif Gruppe East and Eingreif Gruppe West and were located in the area of Genzano.  This was about 13 km north of Aprilia and 18 km North West of Cisterna.  The battalion had been at the front for about two months.

The composition of these combat groups is likely why we see pictures of Sturmpanzers and Tigers together in Italy.

Their marching orders:
To be transferred during the night of April 5/6 to the area of Pisa as Army Group Reserves – Armee Grp. V.  Zangen

The battalion is to report daily by 10:00 using radio or telephone once they have reached the interim accommodations. The commander of the Corps Signals Battalion 476 will ensure radio connections. 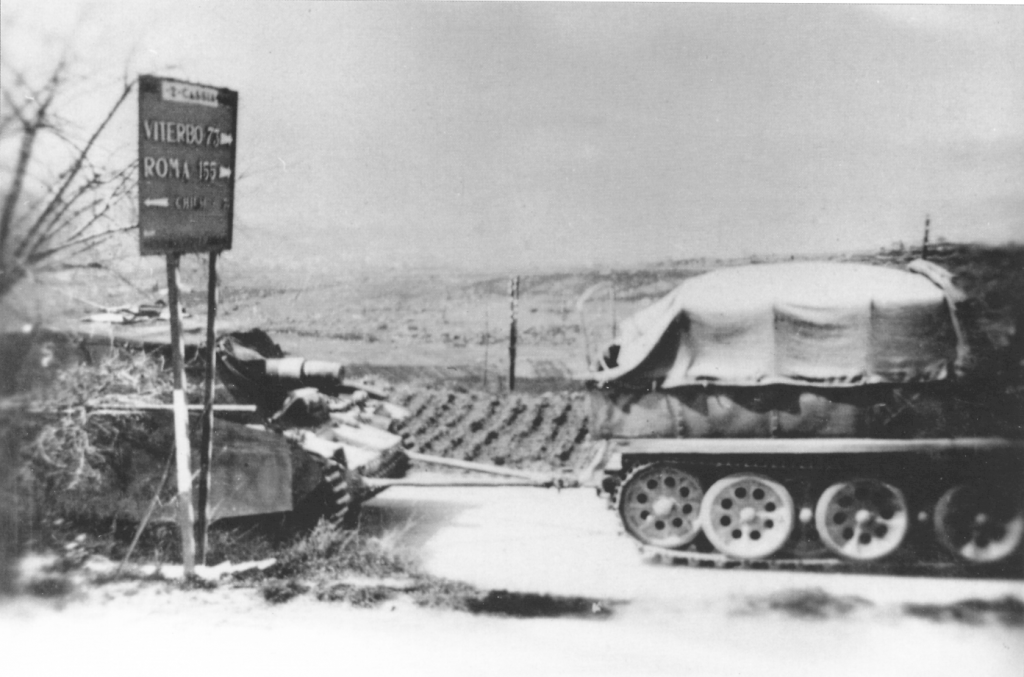 A Sturmpanzer being towed by an Sd.Kfz. 9. Based on the road sign this spot is 155 km from Rome and 73 km from Viterbo which puts it about 50 km south of Sienna. This is the general area projected for the rest stop at the end of the third nights travel. One cant say for certain this photograph was taken during this particular road march but it may have been.

Guide Detail, to be headed by Lt. Apitz, will be responsible for collecting road signs at the repair shop and then placing them along the route.

Recovery Detail will be left behind under the command of Feldwebel Rosipka. They will work in cooperation with the 69th Panzer Regiment HQ to recover 5 Sturmpanzers that are south of Aprilia.  3 men of the 2nd Company are ordered to report for duty on April 5th.  [maybe I am missing something here but 4 men seems a little inadequate to recover 5 vehicles.  It could be that the regiment would supply the rest along with the required equipment.]

A detail headed by Lt. Kaiser will also be left behind to administer the loading of parts still remaining and to facilitate the completion of current affairs.

I think it is interesting to note that these orders do not mention a 4th Sturmpanzer Company. The reason this is interesting is that orders were filled on February 26th 1944 indicating that a 4th Sturmpanzer Company was to be raised.  This was to be carried out by March 20th.  There was some indication that this was being carried out yet here we are in early April and a 4th company is not mentioned in these orders.  I will cover the information that I have available regarding the 4th company in a future post.

This post includes a companion PDF with the following documents:

*The documents in the PDF vary in dimensions in order to maintain the highest possible resolution. It is recommended to download the PDF  to view and not view it in the browser.