The first Sturmmörser to see action were tested in Warsaw during August of 1944. They belong to the 1000 Stu.Mrs.Kp and it had two vehicles.

On August 12th, 1944 the 9th Army Transportation Overview records have two entries for Sturm-Mörser. One indicates a battery of three 38 cm Sturm-Mörser in transit with the first expected on August 13th. There is also an entry for a Tiger mit 38 cm Werfer.

On August 13th the morning report again has an entry for a Tiger mit 38 cm. The evening report has a similar entry but this one also indicates that the vehicle is a prototype.

On August 14th the morning report has the same entry as the previous evening.  By evening, however, that entry is replaced with a new one.  This one specifically identifies Sturm-Mrs.Kp. 1000. It indicates three Tigers mit 38cm Werfer in transit. The first is expected to arrive on August 14th or 15th.

On August 17th the second Tiger mit 38cm Werfer arrives. There is never mention of the third Tiger with 38cm Werfer again on the report. The daily panzer inventory report shows 2 Panzer VI with 38 cm.

The daily panzer inventory continues to show 2 vehicles until October 10th. After this they no longer show up.

There is no documentation that I have found in the 9.AOK records that indicates if the units have been reassigned. However, on October 15th there is a note that Stum-Mrs.Kp.1000 would be on transport to XXXXVI.Pz.K. in Budapest on October 16th 1944. The company with both Sturmmörser was loaded on a train and sent to Hungary on October 17th. The train is then immediately returned to Warsaw but apparently with only a single Sturmmörser. This Sturmmörser arrived in Warsaw-West on October 20th at 00:10 hours. The single Sturmmörser left in Hungary may have been captured by the Russians and could be the Sturmmörser currently in Kubinka.

Beginning on October 21st Sturm-Mörse Kp.1000 again shows up on the daily panzer inventory of the 9 Army but showing only a single vehicle. It remains on this report until November 19th. On November 18th, 1944 the unit appears on the 9th Army shipment report indicating it would be leaving Warsaw on November the 22nd on train number 231 295 with a destination of Tr.Üb.-Platz Sennelager. A notation on the report of November 23 indicated that the unit left on the scheduled train on November 22 at 18:22 hours.

After returning from Poland the company was to be formed into a complete 4 vehicle company and would spend the moths of November and December refitting. During October 4 vehicles were shipped to the 1001st company and the 1000th company was shipped an additional 2 vehicles. The final company, the Sturm.Mrs.Kp.1002, would not receive their vehicles until December. 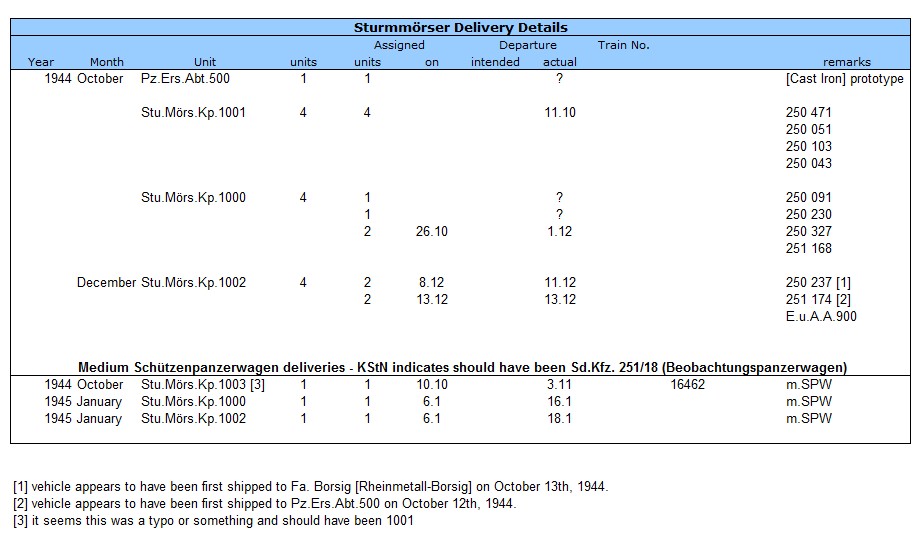 Sturmmörser companies were organized using KStN 1161. This organization authorized 4 Sturmmörser per company, 2 per platoon, and one Sd.Kfz.251/18 (Beobachtungswagen). According to the KStN the company should have 4 officers, 31 NCOs and 43 enlisted for a total of 78 men (later modification would increase this to 79). Documents from OB West dated December 7 1944 indicate that Sturm-Mrs-Kp. 1000 had arrived in Elsdorf with 2 officers, 17 NCOs, 66 enlisted and 4 Sturm-Mörser for a total of 85 men. It seems less officers and NCO where available than authorized which was typical for this stage of the war.

Move to the artillery branch

The Sturmmörser had originally fallen under the purview of the Panzertruppen but by Hilters orders were to be transferred to the Artillery branch. The first mention of this seems to be in November of 1944 but the orders were not issued until January of 1945. The orders placed them under the command of Gen.d.Art. [General of the Artillery] and they would now be referred to as Sturm-Mörser-Batterien (RW 61). It also seems that at this time the responsibility for training was shifted from Pz.Ers.u.Ausb.Abt.500 to Pz.Haub.Ers.u.Ausb.201.

The same document of November mentioned increasing the number of Sturmmörser to 6 per company but again the orders are dated much later. A document giving orders to increase the number of Sturmmörser for Sturm-Mörser-Battr. 1000 from 4 to 6 is dated 02.20.1945. Having 6 vehicles was more common for units that were organized as batteries but I don’t know if this change was initiated by Gen.d.Art. It does not appear that a new KStN was issued when the units authorized number of Sturmmörser were increased to 6. One might assume that an additional Sturmmörser platoon was added to the current KStN organization.

Some sources indicate a total of 18 Sturmmöresers were delivered but I have only been able to find indication of 13. If the other 5 were delivered then the additional platoon seems possible.

This article was originally posted in 2016.  I cleaned it up a bit but also finally got around to reading Timm Haaslers and Lee Archers, Sturmtiger book (The Combat History of the Sturmmörser Kompanies 1000-1002) and wanted to comment on it.

Having already tried to find information on these units I was super pleased by how much information they were able to find on these units. The book had a great layout.  It started with the technical aspect and then went to a month-by-month combat history.  All units are covered at the same time so you can easily tell what was going on with the units in any single point in time. Most of the Sturmmörser covered in the photos have been seen before but there was a surprising number of new photos (to me). The last section covers some of the more well-known Sturmmörser with good set of photos and a brief history of the Sturmmörser.

To finish up the book the appendix includes a chart showing where the units were allocated, unit commanders, chart for KStN 1161 and some Tech Intel reports on the Sturmmörser. Great book overall and having an interest in these units I found the book to be very satisfying on the quality and quantity of the information that was made available.

This post includes a companion PDF with the following original documents:

The original versions of the Tech Intel reports included in the book can be downloaded below.

*The documents in the PDF vary in dimensions in order to maintain the highest possible resolution. We recommended to download the PDF to view and not view it in the browser. 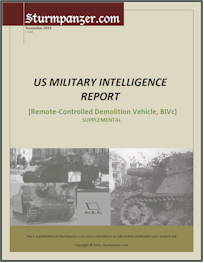