The German term panzerspähwagen is often interpreted as armored car but the definition is actually a bit broader. Armored Scouting Vehicle would seem more representative of how the term is used.

Some of the original 4 wheeled scout car or armored cars where the Sd.Kfz.221 & Sd.Kfz.222. these were in heavy use in the first half of the war. Larger 8-wheeled versions were also created, vehicles like the Sd.Kfz.231 & Sd.Kfz.232. However off-road combat condition lead to use of half-tracks and eventually some fully tracked vehicles.  The heavier vehicles were replaced by the Sd.Kfz.234. This line of 8-wheel armored cars would have 4 distinct versions by wars end. Each new version more heavily armed than the previous. 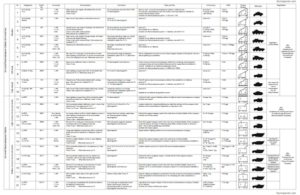 At the time of the Normandy campaign the Germans were employing at least three panzerspähwagens that were not technically armored cars.  These were the Luchs (Sd.Kfz.123), Aufklärungspanzer 38(t) (Sd.Kfz. 140/1) and the Sd.Kfz. 250/9. 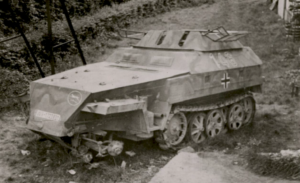 U.S. Intelligence reports for three German panzerspähwagen.  These are armored scout vehicles used during the Normandy campaign. One is a half-track and the other two are fully tracked.