The Panzer Division 1944 organization did not have any major changes from the late Panzer Division 1943.  This is with regards to combat organization.  There was, however, a major change to unit organization referred to as Freie Gliederung. This is where the supply units, which were normally in a company, were removed and combined in supply company. This company would then serve the entire battalion. May K.St.N. were updated with this change in April of 1944.  Those K.St.N. where the organization was changed in this way have (fG) trailing the K.St.N. number.  An example would be, 1177 (fG) v. 1.4.44.

Using the gliederung image below you can see that this document flows  from the most significant (combat) units at the top and then works down to the support units. At the very top of the diagram is the division command.  This would typically include mapping, police and division escort units. 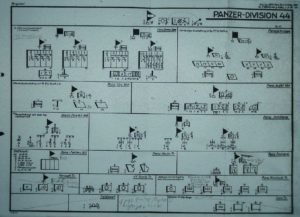 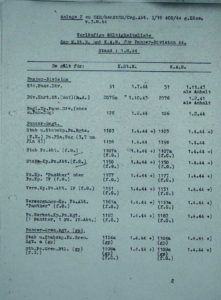 The Panzer Regiment of the Panzer Division 1944 consisted of two battalions. One battalion had Panthers and the other Panzerkampfwagen IV’s.  Each battalion was authorized 76 tanks.  There were 17 in each of the 4 companies and 8 in the battalion headquarters company.  In addition, 8 tanks were assigned to the regimental headquarters. Three 3 Panthers signal platoon  and 5 Panzerkampfwagen IV’s in the reconnaissance platoon.  This brought the total number of tanks for the regiment to 160.

The division had two panzergrenadier regiments with two battalions each. The first battalion of the first regiment was an armored battalion which means it was equipped with armored half-tracks. The remaining three battalions were motorized. Each regiment was also authorized a self-propelled heavy infantry gun unit (K.St.N. 1120a v. 1.4.44) and an engineer company (K.St.N. 1118 v. 1.4.44).  This engineer company organization applied either a version A or version B.  Version A for the motorized regiment and Version B (with half-track) for the armored regiment.

A previous post featuring a German manual on the Wesp can be found here.

The PDF document is about 40MB and also includes lists of manpower, weapons and vehicles by KStN.

*The documents in the PDF vary in dimensions in order to maintain the highest possible resolution. We recommended to download the PDF  to view and not view it in the browser.