In May 1942, after a successful winter counter-offensive, the Russian Army attempted to expand on their success.  They launched an offensive south of Kharkov against the 6th Army.  The 14th and 16th Panzer Divisions were under the 3.AK, which was part of Army Group v.Kleist. These two divisions would be the vanguard  of a counter-attack from the south. A counter-attack that would end up encircling  the attacking Russian forces and in the end capture around 240,000 prisoners.  This battle is known as the Second Battle of Kharkov.

The Red Army offensive began on May 12, 1942.  The Russians had underestimated the German ability to counter the attack however.  The Germans had already been planning an operation to remove the Izium salient south of Kharkov. as a result the German had already gather the forces needed to counter this latest Russian attack.  On May 17th the Germans took the offensive Kleist’s 3rd Panzer Corps began a counterattack on the Barvenkovo bighead.  By May 24th  the Russian forces had been surrounded and by May 30th the remaining Russian soldiers surrendered. 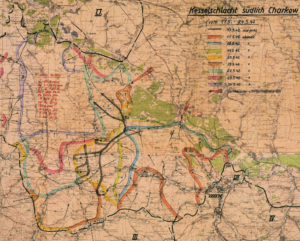 This is one of the best situation maps I have seen as it very nicely details the sequential movement of German troops over an 8-day period.

This map is part of a series that covers May 11th to May 30th, 1942 that can be downloaded below.  The set basically has image per day and shows greater detail.  The unit information is more specific in these daily maps. The images were large so they have been slightly compressed (44MB) with very little loss of quality.  Contact me if you are interested in the uncompressed copies at 273 MB.