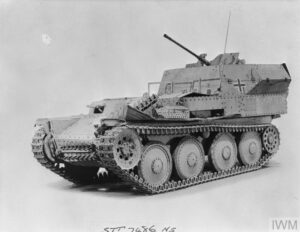 Technology moves quickly during a war and the Germans soon found themselves with a lot of obsolete tanks.  However, they did a great job of repurposing these chassis for other uses. Whether through rebuilding old chassis or using modified new ones. The Panzerkampfwagen 38(t) is a prime example of this as this chassis was used in a variety of roles. One such role was as an Armored Anti-Aircraft platform. This was designated the 2cm Flak 38 auf Fgst. Pz.Kpf.Wg.38(t). 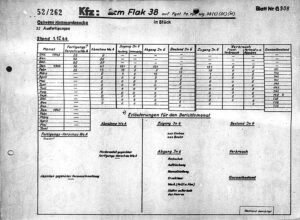 During this period of the war the need to provide anti-aircraft protection for the panzer divisions became urgent. On January 13th 1944 a request was made for the creation of 10 armored anti-aircraft platoons using the 2 cm Flak 38. The orders indicate that they should start by shipping two platoons on January 20, 1944 and then two more platoons every ten days. They should also be allocated based on their order on the provided list. The platoons were to be setup without motor vehicles which would be provided by the receiving divisions.  The list is below and has been enhanced with information from the delivery documents for the Flakpanzer 38t. 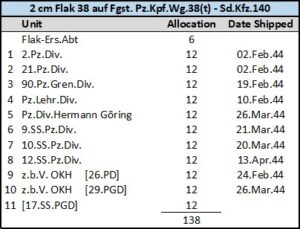 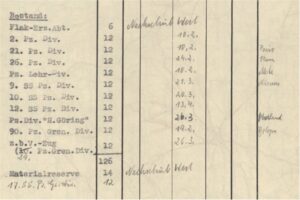 These units were to be created in accordance to K.St.N. 1195 (T.E.) Panzer-Fliegerabwehrzug (2 cm Flak 38) dated 1.Feb.1944. A copy of which was included in these orders.   This K.St.N. is specific to the Panzerkampfwagen 38(t) für 2 cm Flak 38 (Sd.Kfz.140).  The platoon had three Flakpanzer groups with 4 Flakpanzer 38(t) each.  The groups were further divided into half-groups with 2 Flakpanzer 38(t) each and 8 men (3 NCO’s and 5 enlisted). The groups consisted of the 4 Flakpanzer 38(t) and the 24 men to operate them plus 3 men (group leader, rangefinder operator and Kettengrad driver) and a Kettenkrad . For groups 2 & 3 the rangefinder operator is dropped.

The platoon commanders group consisted of 4 men, two motorcycles and a car.   The commander, from Stellengruppe Z, would be a lieutenant. A small maintenance unit had 7 men and two trucks and an even smaller baggage unit had 4 men and two trucks. The grand total for the platoon is 1 officer, 24 NCO’s, 45 enlisted, 12 Flakpanzer 38(t), 5 motor vehicles, 3 Kettenkrad and 2 motorcycles.

There seems to be some errors in the K.St.N. as the Kettenkrad for groups 2 & 3 are listed under the Kraftwagen column.

The document mentioned above, KStN 1195 and a US Intel report on the Flakpanzer 38 can be downloaded below