The Sturmgeschütz Escort Batteries, or Sturmgeschütz Begleit Batterien, were first introduced in early 1944 as a way of providing organic infantry support to the Sturmgeschütz Battalions. Assault guns had an inherent vulnerability to infantry as their fixed main weapon did not allow for easy 360-degree coverage.

The solution to this was to have infantry cover the assault guns.  However, for independent battalions, this required them to get infantry support from other units they were involved with.  Logistically, this could prove to be problematic, and ultimately, the infantry’s priority could be amended by their parent unit.  The idea of having organic infantry support for the assault guns would definitely have its advantages.

I find the concept of dedicated escort units for assault gun units very interesting.  As a tactical solution, it is very compelling as it is low tech and easy to implement. The assignment of support infantry seems a small price to pay compared to the cost of losing an assault gun.  The loss of vehicles to infantry could be catastrophic to a unit’s mission. This had already been seen in some of the early engagements with the Ferdinand.

Early 1944 is where we see the first signs of formalizing this solution with orders forming Sturmgeschütz brigades with escort batteries.  These escort batteries were basically built around three platoons that were almost identical to the grenadier escort platoons previously discussed. The only significant difference was that these platoons each had four motorcycles with sidecars for reconnaissance where the grenadier escort platoon had only one. Since each platoon still covered 10 Sturmgeschütz, the battery could cover a total of 30 vehicles.  Added to these platoons was a commander’s group and a baggage group. The trucks in the battery were for ammunition and equipment.  The men could either walk or ride on the Sturmgeschütz.

To be deployed along with the Escort Battery was a Panzer Escort Battery.  These were comprised of Pz.Kpfw. II.  There were four Pz.Kpfw. II in each of the three platoons and then two more in the commander’s group for a total of 14. I am not entirely sure of the purpose of this unit.  I suspect that it was there to provide additional firepower against enemy infantry.  After these initial orders, these Panzer Escort Batteries were no longer included in the forming/reforming of Sturmgeschütz Brigades.

So, the brigade organization would have looked something like this:

Documents[ii] dated 21st of June, 1944 show the equipping of five Sturmgeschütz brigades with Armored Escort Batteries (Sturmgeschütze Begleit Batterien (gp.). These were not a replacement to the current Sturmgeschütze Begleit Batterien but actually seemed more like a replacement to the Begleit Panzer Battery which had been discontinued. The armored version of the escort battery would have 17 m.SPW.  There would be two Sd.Kfz.251/3 in the commanders group, four Sd.Kfz.251/17 (2cm) in each of the first two platoons and  seven Sd.Kfz.251/7 in the engineer platoon. The exact organization of this unit is spelled out in KStN 448 (gp.) 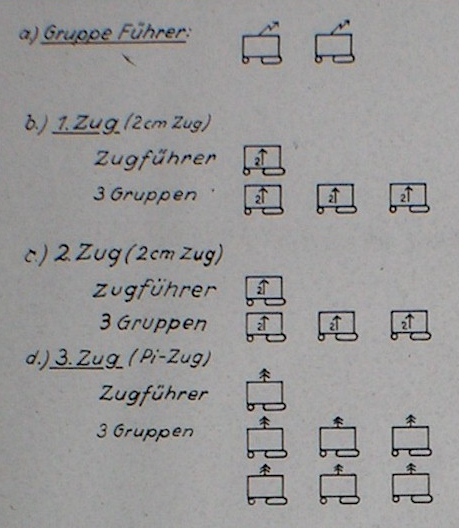 This armored version  never was implemented. One of the reasons indicated was the lack of vehicles since there was already a shortage of Schützenpanzerwagen.

There would also be a December 1944 version of the standard 448 KStN.  The major change  was removing the reconnaissance squads from the escort platoons all together and also moving the engineers from the escort platoons to their own platoon. So, the size of the escort squads was reduced by the three engineers,and the engineers  had their own platoon.  At some point the name for this unit was also changed from Sturmgeschütz Begleit Batterie to Begleitgrenadier-Batterie.