A few years ago, I came across this German Assault Engineer Battalion (Sturm-Pionier Bataillon) organizational diagram (gliederung) . It seemed interesting as this was a fairly large battalion with a nice variety of equipment. I tried to find additional details but unfortunately without knowing the specific K.St.N. additional information was hard to come by.

Then I happened across a couple of documents dated August of 1944 that were specifically outlining the formation of this unit type.  Going through the documents it actually got more interesting as this unit actually had a split company. What I mean by that is that it used parts of two distinct K.St.N. to form one of the companies of the battalion.  By piecing together these K.St.N. and using the gliederung as a guide I think I have been able to construct, with some accuracy, the actual composition of this unit.  What follows is my description of the units composition along with my rational for why I think this is a fairly accurate organization of this unit. 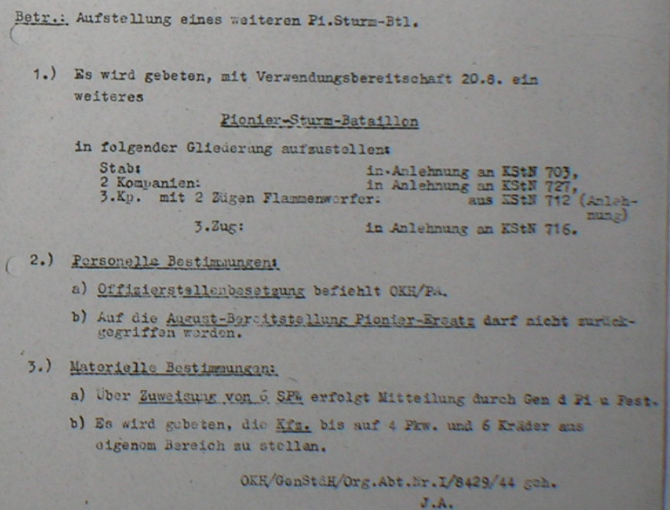 Here is a slightly tweaked gliederung for the battalion.  I wanted to clearly show that the battalion’s composition included of two half-track companies. I also wanted to include weapon counts and the specific K.St.N. 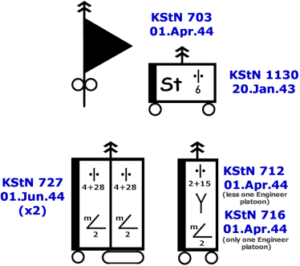 The German Assault Engineer Battalion (Pionier-Sturm-Bataillon) has the general organization of a battalion consisting of a Staff/HQ’s Company and three engineer companies, for a total of around 900 men. The purpose of the battalion as indicated by its title was a unit designed to be used in assaults. To that end the unit is partially armored with 22 Sd.Kfz.250/251 half-tracks, it has two flamethrower platoons (as well as a half-track flamethrower platoon) and  a specialized “Typhoon” platoon equipped and tasked with assaulting fortress type positions.

I found two distinct document sets that give insight as to how a German Assault Engineer Battalion is organized.  Both are dated August 1944 and indicate the KStN to be applied. The staff /HQ’s company used KStN 703.  This has the commander’s group, reconnaissance platoon, maintenance platoon and other support units.  This is your basic German infantry type HQ’s company.

The battalion has two armored engineer companies organized under KStN 727, Panzer-Pionier-Kompanie (G).  These are armored companies that have 11 half-tracks each. The half-tracks were two Sd.Kfz. 250/3 (signals), two Sd.Kfz. 251/17 (2cm Flak) and seven Sd.Kfz. 215/7 (engineer).  Each company also had an allotment of 30 Goliaths. Although, these do not show up in the KStN as they are considered a consumable like ammunition and panzerfaust. These would be found in the KAN if one was able to locate a copy.  Each company was also allocated 39 sub-machine guns, 28 light machine guns, four heavy machine guns and two 8cm Granatenwerfer 42. With a total personnel count of 267 men per company.

K.St.N. 727 is also interesting in that although it does not technically seem to have two version as we often see them on K.St.N. it does show two distinct versions for the heavy weapons in the 4th platoon.  I guess it could be described as a heavy or gun platoon.  The version described in the gliederung and also in the totals for the K.St.N. has two 8 cm mortars.   However, there seems to be alternate version that would have 4 Sd.Kfz. 251/9 instead of the mortars.  That is the version I would favor but I am not aware when it would be applied.

Both document sets indicate that the third company will be made up of two flamethrower (Fm.W. 41) platoons (from KStN 712, Pionierkompanie (mot)) and one platoon from KStN 716 (Pionierkompanie (mot) “Taifun”). My interpretation from the document that specifically mentions 712 is that it is the full KStN is to be used, however, with only two companies instead of the usual three. Typically, this would be stated as KStn 712 less one company so that it is clear but unfortunately not in this case. However, if we do remove all units from KStN 712 except the two platoon this then will result in a shortage of heavy machine guns and mortars when compared to the gliederung. So, to me it makes sense to use 712 in its entirety (minus the one platoon) and then add a single platoon from KStn 716. It makes the math (mostly) work anyways. 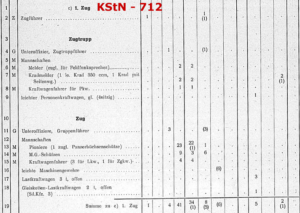 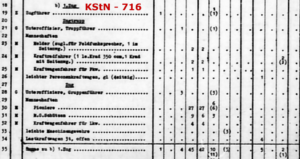 Not indicated in the documents but identified in the gliederung are 6 flamethrower half-tracks, Sd.Kfz. 251/16, (KStN 1130) so I included them in the organization as well.

In looking at the totals we can see that most number match the gliederung but some don’t.  The manpower (+27) and light machinegun (+3) difference seems insignificant.  There is a note in one of the documents indicating that not all units in KStN 703 are to be included.  The problem with this is that if we remove all those units then the man power count is down about 27 men. So, it seems the difference might be reasonably accounted for in variations to the composition of KStN 703. The battalion totals for the remaining counts, for vehicles and heavy weapons match exactly, indicating high a likelihood that the composition as outlined is mostly correct.

A very interesting unit with a variety of half-tracks and miscellaneous special equipment and a lot of fire power.  Hope it was of interest.