After a little digging on Funklenkpanzer units I was able to collected some documents on the Pz.Abt.(FKL).301 from their time when they were reforming after Kursk. After Kursk the Pz.Abt.(FKL).301 was sent back to Germany for refit.  In September it was assigned 32 Sturmgeschüts and sent to France for training.  Effective the 15th of September the battalion was subordinated to the 14th Panzer Division (also in France for refitting), located in the general area east of Tours. The map below shows the locations of unit of the 14th Panzer Division as well as Pz.Abt.(FKL).301 (labeled as PzAbt.301) 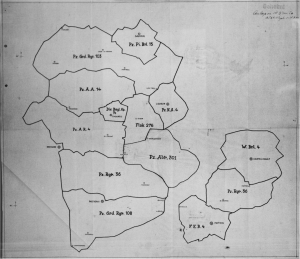 By this time the Funklenk units had their own specific KStNs. These had been introduced in early 1943 and though the KStN specified Panzerkampfwagen III the Pz.Abt.(FKL).301 had been assigned to use Sturmgeschütz III as control vehicles.

At this time the Pz.Abt.(FKL).301 was at full strength.  The realignment status report dated the 25th of September indicates this.  They had a slight shortage of officers but otherwise in good shape. Data from that report is below and shows the 32 Sturmgeschütz, this will account for the 30 vehicles in the 3 companies and the two command vehicles. It also shows the 108 Sd.Kfz.301 – B IV (36 per company).

So what exactly might go on during training?  Below is a schedule for a day’s training for the battalion on October 1st, 1943.

On October 10th, with the 14.PD having received orders for transfer back to the east, the battalion was subordinated to the LXXX.A.K. and then later on October 13th AOK.1 is given orders that reassigns Pz.Abt.(FKL).301 to the 15.AOK.

Original documents that outline much of the information above are include in a document set that can be downloaded below.  Including full unit status reports for September 29th, 1943.