The Jagdpanther was the result of the need for a hard-hitting tank destroyer mounting the 8,8 cm gun.  It was previously tried twice with the Ferdinand and the Nashorn, with limited success.  While the gun itself proved to be spectacular for the role the carriages it was mounted on proved to be less than stellar.  Using the panther chassis was a logical step given the ability to easily mount the 8,8 cm Pak 43/3. The chassis was better able to support its weight when compared to the Nashorn and also had a closed compartment. Much lighter and nimbler, the advantages over the Ferdinand are obvious.  It also had lower silhouette when compared to the Ferdinand.

This was the organization authorized for the schwere PanzerJäger Abteilung 654. However, due to production delays it would take months to get all the authorized Jagdpanthers.  The last Jagdpanthers shipped out on August 14th, 1944, with the exception of the three 3 command Jagdpanther. Those were replaced with three Panther befehlswagen and shipped to the unit on July 6th, 1944. 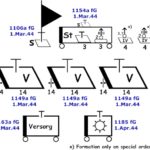 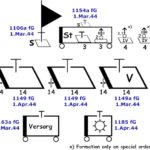 The schwere Panzerjäger Abteilung 559, on the other hand, used this organization. They were shipped five Jagdpanther on May 18th,  eleven on August 24th and two on September 3rd. Presumable  fourteen of them for the Jagdpanther company and three for the Stabs (HQ’s) unit.  However, by my count, this did leave them with an extra Jagdpanther.  The two Sturmgeschütz companies were filled with 28 Sturmgeschütz III, which were shipped out to the battalion in August.  The first nine shipped on the 21st,  ten on the 23rd and finally nine on the 25th.

The schwere Panzerjäger Abteilung 560 had a slight variation on this theme. They not only had Jagdpanzer IV /70 in the two Sturmgeschütz companies, but also in their Stabs unit.

Below are some additional resources.