This is a post for a video tutorial on German Unit Organizational Charts and Diagrams. The video walks you through different variation of these documents. 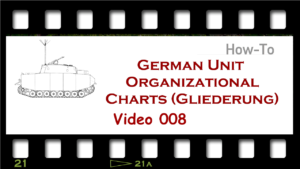 A very useful document in researching German units are the German Unit Organizational Diagrams (Gliederung) or war structure (organization). You will see these referred to as Kriegsgliederung (war structure), Grundgliederung (basic structure) or just gliederung. So these show the structure or organization of a unit and I typically refer to them as organizational diagrams.
These are organizational diagrams that show the basic compositions of the units within the unit in question. These could start out as high as the entire German Army and show the Army Groups and then indicate the armies in each. You can find gliederung for Armies that shows the Army Corps subordinated as well as the divisions in each.
The organizational charts come in two types, theoretical and actual. Theoretical comes in two version of its own, the first is theoretical basic structure and would apply to units of divisional size and smaller and expect organization.
The structure for units of division size and below were very specific. They were modified from time to time but the structure was very specific. The structure of an infantry division organized under a specific structure were all to be the same. In theory.
However larger units such as Corps and Armys were organized ad hoc for specific purposes and tended to be more fluid. But when specified they now had a theoretical composition and strength based on that specification. A Corps can be organized with having only two infantry divisions but it can also be organized with two panzer divisions, three infantry division, two independent artillery regiments and one independent heavy Tiger battalion. 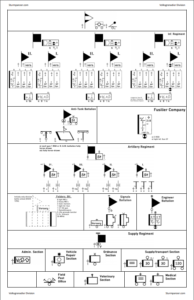 Things to note that are fairly typical of these divisional diagrams is that the work from a top down perspective. At the top of the chart is the division staff. This is typically the divisional commanders’ group as well as a map unit and police unit for infantry divisions. Panzer divisions would add an escort company. In the early days they even threw in a music corp. Then you work your way down the diagram from most important or significant units to least important. This is only generally speaking but it’s no surprise that the infantry regiments are at the top. At the very bottom are the support troops. These regiments and battalions are further broken down into smaller units. These smaller units are typically company and battery sized units. When looking at this VGD diagrams you can generally see the unit for every K.St.N. for the division represented.

Another interesting variation is where the specific K.St.N. that are used/authorized are indicated in the document. This is a much easier way to tell where each K.St.N. belongs without having to reconcile the gliederung to the K.St.N. list.

The samples discussed are included in the document set below.