I do not normally do individual research but I recently ran across an interesting set of documents on Major Anton Donnhauser of the 11th Panzer Division in the OKH records and thought I would share what I found. This was a document set labeled as “Proficiency appraisals of officers of German armored units”.

Basically, the document I want to highlight is the Beurteilungsnotizen which seems to be a Performance Evaluation.  It seems they were done periodically on an as needed basis. There were nine in this set of documents for Major Donnhauser ranging from November of 1940 to April of 1944. 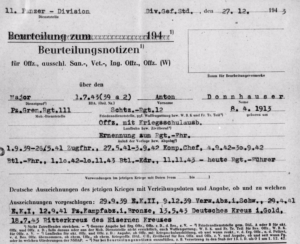 As you can see from this sample above, there is a lot of good information on this form. It starts with his rank and the date he attained that rank as well as the unit currently assigned to and the reason the evaluation is being completed. This one is on the occasion of his assignment to regimental commander of Panzergrenadier-Regiment 111. The form also includes dates for previously held positions.   It shows that Major Donnhauser was a platoon commander from September 1939 to May 1941, a company commander from May 1941 to September 1942, a battalion commander from October 1942 to November 1943. And as of November 1943, he was a regimental commander.

There is also a section for awards.  Most notably for the Major are the German Cross in Gold awarded on May 13th, 1943 and the Knights Cross on July 18th, 1943.

Below this section, of course, is the obligatory contextual notes from the officer performing the evaluation. In this particular case, under the section of weaknesses, the response was “none have emerged”, so not bad. The final rating was “Above Average”.

There is also a section on languages spoken that shows the Major had school level knowledge of English and French.

This specific document was all I had intended to cover and to highlight the type of information it contained.  However, when I started to review some of the other documents in this set and look at the evaluations a bit more closely, some interesting information materialized.

Even some of the finest officers can have a black mark on their record and it seems the Major may have been one of them.  We can start with a document entitled Strafnachricten (A), punitive/criminal message. This is a document dated January 15th, 1941 that indicated that Lt. Dannhauser had been found guilty of theft and embezzlement by a field court of the 9th Panzer Division.  The incident date was September 11th, 1940 and he was sentenced to four months in prison.

Based on the performance evaluation that preceded this incident, Dannhauser had been a first lieutenant and company commander of the 3./Schtz.Rgt.11 of the 9th Panzer Division. I tried to find additional information about this crime so it could be put into some context but I could not.  It is not inconceivable that while still being a crime there were extenuating circumstances.  The fact that this incident appears to be no more than a bump in the road of his career seems to support that.

Supposedly the sentence included a reduction in rank however, on the 12th of October, 1940, the verdict was mitigated and the loss of rank had been dropped.   The prison sentence was reduced to six weeks of confinement to quarters with the remaining of the time deferred until after the war.  He was removed as a company commander but was made a platoon commander with the 3./ Schtz.Rgt.111 of the 11th Panzer Division.  Evidently the 9th Panzer Division was no longer interested in his service.

There seems to be a flurry of activity in early 1943 in an attempt to clear his name and have the charges removed but I am not sure why.  By this time, he was already a Captain and Battalion Commander so the restriction on promotions had clearly been removed.  Maybe it had only been incremented so that further promotions would require additional justification.  Either way there was a lot of good to say about him, and he was eventually promoted to major and eventually become a regimental commander.

Overall an interesting set of documents which can all be downloaded below. One set is his performance evaluations and the other set are documents relating to his convictions and related actions.