In the German Army’s never-ending quest for better tank destroyers, the Panzerkampfwagen IV was a natural choice for a chassis. Though the Sturmgeschütz IV used the same chassis and had similar capabilities as the Panzerkampfwagen IV, it was technically an assault gun and not a tank destroyer. The Jagdpanzer IV like the Jagdpanzer 38 sported more modern design technology with slopping armor and reduced height (except for the Alkett version). 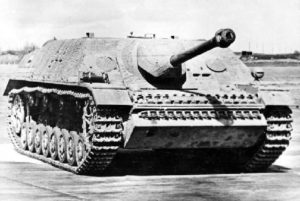 The Jagdpanzer IV began production in January of 1944. The initial gun was the 7,5 cm L/48 which was the same gun found on the Sturmgeschütz III and IV. However, it was soon upgraded to the 7,5 cm L/70 found in the Panther. It was produced in 3 distinct versions. 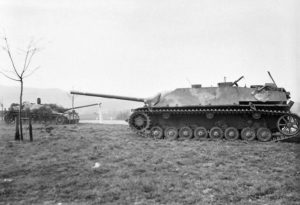 The Jagdpanzer IV’s were used in the Panzerjäger Abteilung of Panzer and Panzergrenadier Divisions. The Panzergrenadier Divisions had two companies of 14 Jagdpanzer IV’s each and three more in the headquarters section for a total of 31. The Panzer Division had 10 Jagdpanzer IV’s in each of the two companies and one in the headquarters section for a total of 21. The K.St.N. applied was 1149 v.1.2.1944 and later 1149 (fG) v.1.4.1944. The Jagdpanzer IV’s were also assigned to Panzer Brigade units using an unnumbered K.St.N. v.15.7.1944. It was very similar to 1149 (fG) though it authorized only 11 Jagdpanzer IV’s. I could not find an 1149 (fG) v.15.7.1944 in Tessin, however, I did find the v.15.7.44 K.St.N. used in the Panzer Brigades so apparently no number was assigned. 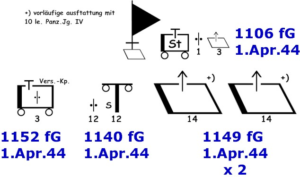 The PDF document below provides additional information for K.St.N. 1149 v.1.2.1944.  This includes a schema showing the vehicles assigned to each of the platoons. As well as total man power, vehicle and ammunition counts. Also provided below is the actual 1149 v1.2.1944 K.St.N.