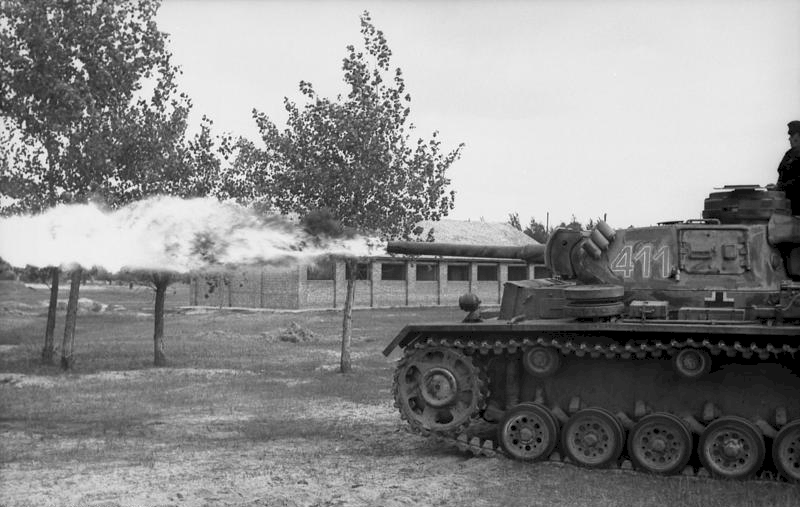 The Flammpanzerzug organization (Armored Flamethrower Platoon) was very basic, it simply had 7 Pz.Kpf.Wg.III flamethrower tanks. The Pz.Kpf.Wg.III (Fl) had a three-man crew. The commander who served as the flamethrower gunner (also the coaxial machine gun), the radio operator who also manned the ball mounted machine gun in the front plate of the hull and the driver. The platoon commander (also a tank commander) was an officer and the other 6 commanders were NCO’s.

The official K.St.N. was 1190 – v.25.1.1943. For the remaining crewmen there were six more NCO’s, two radio operators and 4 drivers and 8 enlisted men, five radio operators and 3 drivers. The K.St.N. also has two armored flamethrower mechanics. However, there is no transportation or maintenance vehicle provided for these mechanics. My explanation is this: This platoon unit was intended to be subordinated to the battalion headquarters company. It is not intended to operate independently and be self-sufficient. The battalion headquarter company has a maintenance section but would not have mechanics familiar with the flame throwing equipment in the Flammpanzerzug tanks. These men would actually be assigned to the headquarters company but would only be provided if the battalion was assigned a Flammpanzerzug as they would have specialized training specifically for this equipment. I have seen other K.St.N. that specifically mention this, where men and equipment authorized by the K.St.N. would actually be applied to another K.St.N. Can’t think of which K.St.N. that was but if I remember I will add a note to this post. Each of the crewmen were armed with a side arm and the two mechanics with rifles. The K.St.N. indicates 14 light machine guns; these are the coaxial and hull mounted machine guns for each of the seven tanks. There are also seven sub-machine guns, one in each of the vehicles.

Here is a sample gliederung for the Panther Battalion of the 16th Panzer Divison (mid 1943) showing the flammpanzerzug (1190) attached to the Stabs Kompanie. This is just the gliederung and does not indicate exactly how the platoon may have been assigned in the division.

The flamethrower system was mounted inside the turret and allowed the turret traverse through 360 degrees. The oil containers were placed inside the hull and held 1020 liters of flame oil. The flow rate of the pump was 7.8 liters/second and could achieve a range of 60 meter (when ignited). Holding down on the trigger would empty the tanks in about 130 seconds. As might be expected, due to the fire hazard, a total of five fire extinguishers were carried, three inside the vehicle and 2 outside. 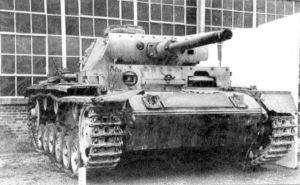 One hundred Pz.Kpf.Wg.III (Fl) tanks were built using Pz.Kpf.Wg.III Ausf. M chassis. The official designation was Sd.Kfz.141/3. These were completed from January to April of 1943. Acceptance by Waffenamt (weapons department) can be seen in the document below. 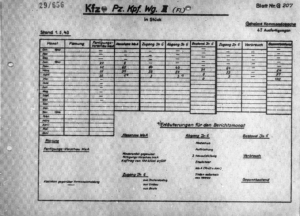 The Flammpanzerzug was not included in all panzer battalions, it was only authorized by special orders. As mentioned above, if it was authorized it was assigned to the battalion headquarters company. By May of 1943 they had been issued to units as follows:

Thirteen of the 28 assigned to Grossdeutschland were reassigned to the 11. Panzer Division.

Based on combat reports it was most effective to employ the Flammpanzer with regular gun panzers for support. When used in the open the Flammpanzer could be easily spotted while flame throwing and so they were to be employed in terrain with adequate cover. The 26. Panzer Division took it one step further and expanded their Flammpanzer Zug to a company sized unit. This was accomplished by adding platoons of Italian Sturmhaubitze and Sturmgeschütz.

The K.St.N. for this unit can be downloaded below under Additional Resources.