The documents provided include attachments that provide details regarding the provisioning of men and equipment. There are also attachments for the organizational diagram and a list of applicable K.St.N. Overall a very interesting composition that I don’t believe can be considered to represent a “Standard” or even typical 1943 Panzer Division.  I will try to locate some additional 1943 Panzer Division organizational diagrams and possibly an OKH standard diagram and KStN list.

After a quick glance at the organizational diagram here are my initial impressions.  The “F” under each panzer company in the panzer regiment I presume to mean French. Such that the vehicles are of French origin. We know that by the time of the Normandy invasion the 21st Panzer Division had a Panzerkampfwagen IV battalion yet it seems that at this time in 1943 they were all French. For the grenadier regiments there are two armored panzer grenadier battalions as opposed to the typical one.

An unimpressive reconnaissance battalion for a panzer division having only two motorcycle companies.

Also interesting are the rocket launchers vehicles, 4 in the Sturmgeschütze Battalion and one in each of the infantry battalions.  These are indicated to be half-tracked based launchers with 16 launchers.  Nothing with 16 launchers comes to mind however it’s probably French or French hybrid of some time.  We will have to see if we can get additional info on these.

With regards to the KStN list you will note there are many KStNs dating back to 1941, especially in the panzer regiment. Interestingly the KStN for the Army Flak Battalion are indicated as towed-motorized (mot Z) and not self-propelled as the organization diagram seems to suggest.  There are 57 numbered KStNs listed with a few just having descriptions.

As a side note on the T.E. (subunit) KStNs: These can be considered as add-ons.  Most KStN are for company size units but these generally were about the size of a platoon.  Typically used to add heavy equipment, like anti-tank guns, to infantry battalions. It was a way to tweak a unit without completely changing a KStN. Therefore multiple T.E. KStNs could be combined to form a specialized company. 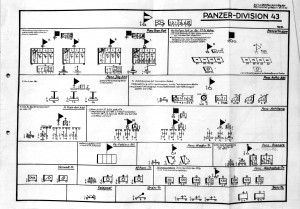